A big thanks to all the online publications and blogs who published reviews of Kick'n It!

Eight reviews have been published in the two weeks since Kick'n It! was released, as well as over a dozen mentions – including this nice one from Jessica Weimar at Mash Those Buttons.  Reviews have been mixed.  In fact, they are equally split between those that love the game, those that hate it, and those that are somewhat lukewarm about it.

I have to admit that reading my first negative review really hurt.  I’ve been making games for 14 years now, so I’ve received plenty of positive and negative reviews before. This time however it was different. It was personal. Every decision that was made was mine. Every accomplishment and every failure was also mine. So I had to take a few days off and come back to the reviews with a more objective mind in order to really benefit from them.

Reviewers that really liked the idea of a hacky sack game gave the highest scores and those that disliked the idea of a hacky sack game (or avatar games in general) gave the lowest scores. Their feeling about the subject matter of the game seemed to set the tone of the review itself. As a couple reviewers pointed out, there hasn’t been a game about hacky sack in over ten years. That made Kick’n It! either fresh and innovative - or pointless, depending on your point of view.

There were several lessons to be learned from these reviews that I am already taking to heart as I scope out the next project. I’ll share them with you when I write a full post mortem for Kick’n It!. Thanks again to all the reviewers. For those of you reading this that have played Kick’n It! I’d love to hear from you. How did you like the game? What improvements would you like to see in a potential sequel?
Posted by Brent Kollmansberger at 1:23 PM No comments:

In the eight days since Kick'n It! launched over 12,000 people from across the world have downloaded the demo and played it.

Posted by Brent Kollmansberger at 9:46 PM No comments:

On our launch day I was amazed and elated to discover that Kick'n It! was number 11 on the top rated games list.  But by the end of the day we were number 202!  We then bounced back to number 31, and are now around 45.  What happened?

Well it turns out that there isn't a minimum number of votes needed to appear on the top rated chart.  So when a game has few total votes, a single positive or negative vote can change its position greatly.  In addition, there are a lot of games on the service that are around 4 stars - including Kick'n It!  Games that are a little over 4 stars can be in position 11.  Games that are a little under 4 starts can be position 202.

So every vote truly counts.  If you're reading this and haven't already voted for Kick'n It! - please take a moment to vote 5 stars.  You can vote from your Xbox by selecting Kick'n It! from the Indie Game marketplace or from you computer by following this link.  Thanks!
Posted by Brent Kollmansberger at 8:50 AM No comments:

After consulting last night with a friend in marketing and reviewing sales numbers from fellow developers I decided to submit Kick'n It! so it would appear on the top of the New Release charts this weekend.

I woke up this morning and there is was.  I'm so excited! 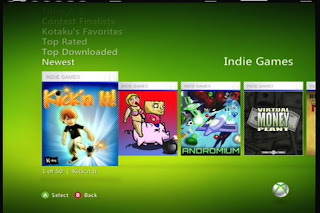 Don't forget to rate it 5 Stars!

Posted by Brent Kollmansberger at 9:24 AM No comments:

Here are a couple images I'm planning to include with my press release. 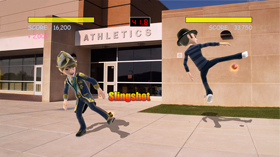 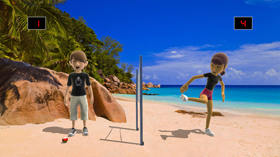 Posted by Brent Kollmansberger at 7:16 PM No comments:

Kick'n It! has passed the peer review process and is ready to launch.  I'm now preparing press releases and completing other PR efforts such as this website to support the planned launch mid-August.

I must live under a rock, because I just found out about the Summer Uprising for Xbox Live Indie Games.  Its a joint promotion shared by 10 indie developers intended to boost awareness of the quality of titles now available on Xbox Live Indie Marketplace.  So I'll be launching right before those games do.  I'm not sure if that's a good thing or a bad thing.  On the one hand, those launches will push mine further down the new release charts.  On the other hand that PR effort could bring new attention to the channel days after I launch.  At the moment I intend to keep my mid-August launch date.
Posted by Brent Kollmansberger at 6:12 PM No comments: